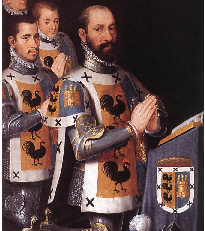 Firm ties between local elites were crucial to the functioning of early modern composite states. During the second half of the seventeenth century, however, existing ties to the ruling Spanish-Habsburg dynasty faced pressure in the Southern Netherlands due to international war. Rather surprisingly and often forgotten, Hispano-Flemish elites persisted; moreover, similar elites emerged through new mixed marriages. So far, research has not solved the conundrum why this could happen under these difficult circumstances of continued tense relationships between Spain and the Southern Netherlands. In addition, these new elites supported Habsburg rule while anchoring themselves in local power structures. This gave rise to mixed identities, which were at odds with the proto-national ‘Belgian’ identity suggested by recent scholarship. Drawing on archival sources, printed and iconographical sources in Spain and Belgium, this project will closely investigate both mechanisms of network and identity formation. By doing so, it aims to contribute to current debates on the construction of transregional elites and identities and on the position of the Southern Netherlands within the Spanish-Habsburg empire, and that for a time span generally neglected by research. Alongside a PhD-dissertation, this research project should also result in peer-reviewed journal articles, presentations on international research forums and public lectures for local audiences.